Born on earth around 1200 and in heaven in 1280, Saint Albert the Great of the Order of Preachers is a great saint for our time so badly in need of his preaching and teaching. We live in a world where many scientists proclaim their lack of belief in God and increasing numbers of young people declare they believe in science rather than religion, assuming in the ignorance of their miseducation that the two must be opposed. As Pope Saint John Paul II declared in 1998 in his Fides et Ratio (on the relationship between faith and reason), we live in a day when scientism grows rampant and many people believe that science and technology provide all the answers to all the problems that plague humanity. On the other hand, some Christians who recognize that science can certainly tell us how to do things, but not whether we ought to do them, fall into the opposing error of fideism, “which fails to recognize the importance of rational knowledge and philosophical discourse for the understanding of faith, indeed for the very possibility of belief in God.” We live in a day of increasing polarization, presented with the false dichotomy of having to choose between the scientism of the intelligent, courageous, and godless secular scientists and the fideism of ignorant, benighted, and bigoted fundamentalist Bible-thumpers.

The saint and doctor of the Church who would be known as Albertus Magnus was born in Bavaria, a fact we infer because he referred to himself as “Albert of Lauingen,” a town which still stands today in southern Germany. He attended the University of Padua where he learned about Aristotle and his writings. He excelled in his studies and later became a lecturer for the Dominicans at Cologne. He also travelled around the region to lecture gaining regional, then international acclaim. At the same time he started lecturing, Albert produced “Summa de Bono,” after collaboration with Phillip the Chancellor, who was a renown theologian from France.

Sometime around the year 1223 or so, Albert experienced an encounter with the Blessed Virgin Mary. This encounter moved him so much that he chose to become a member of the Dominican Order. He thereafter studied theology.

In 1245, Albert became a master of theology under Gueruc of Saint-Quentin. He was the first German Dominican to achieve the title. He later went on to teach theology at the University of Paris, and became the Chair of Theology at the College of St. James. One of his students was the famous Thomas Aquinas who would also become a doctor of the Church and a saint.

Albert was very interested in Aristotle, and he made commentary on nearly all of Aristotle’s works. He also studied the teachings of several Muslim scholars. At this time, the Islamic world led Europe in terms of scholarship, science, and medicine.

In 1254, Albert became the provincial of the Dominican Order. By all accounts, he was a capable and efficient administrator.

Five years later, in 1259, Albert participated in the General Chapter of the Dominicans along with Thomas Aquinas and several other contemporary leaders of the Order. They created a program of study for the Dominican order and developed a curriculum for philosophy. From this course of study would later arise the Pontifical University of Saint Thomas Aquinas, in Rome. Today, the university which is known as the “Angelicum,” is one of the foremost theological colleges in the world. It is still run by the Dominican order.

In 1260, impressed with his acumen, Pope Alexander IV appointed Albert as bishop of Regensburg. Although he was a bishop, Albert refused to ride a horse and went everywhere on foot. This seemingly unusual practice was consistent with the rules of his order. The life of a bishop did not agree with Albert and he resigned from his post in 1263.

In that same year, Pope Urban IV accepted his resignation and reassigned him to preach about the Eighth Crusade to German-speaking people. The crusade was intended to recapture the city of Tunis in North Africa for Christendom, and was a total failure.

In his later years, Albert became renowned as a mediator. He mediated disputes between individuals as well as resolving a dispute between the people of Colonge and their bishop. He also founded Germany’s oldest university in that city.

Before his death, he mourned the early passing of his great student, Thomas Aquinas, who would later be recognized as a saint and doctor of the Church. Aquinas died in 1274. Albert spent his last years defending the work of Aquinas which is among the most important work in the Church.

Three years after his death, his grave was opened and his body found to be incorrupt. When his grave was again opened centuries later in 1483, they only found his skeleton. His relics are presently found in the St. Andreas church in Colonge. 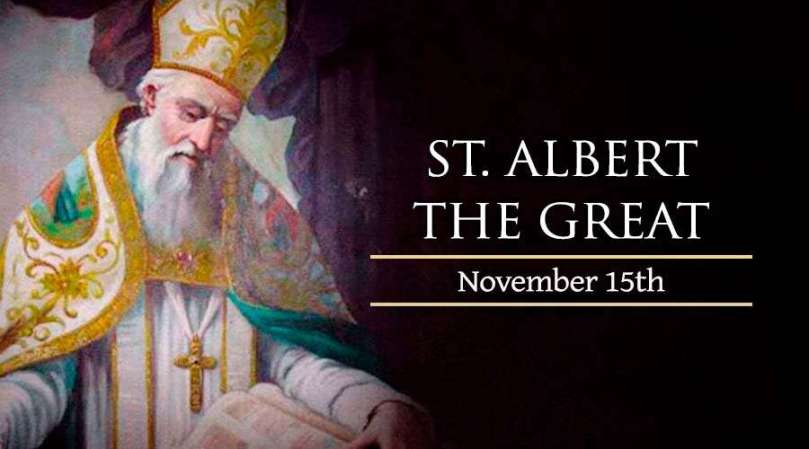