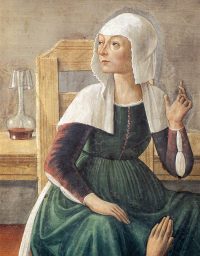 St. Fina or Seraphina, was an Italian Christian girl who is venerated in the Tuscan town of San Gimignano. Fina dei Ciardi was born in San Gimignano in 1238. The Daughter of Cambio Ciardi and Imperiera, a declined noble family, she lived all her existence in a humble house located in the historic centre of the famous “city of beautiful towers”.

The child was pretty and attractive. Poor as she was she always kept half her food to give to those who were worse off than herself. As far as possible she lived the life of a recluse at home, sewing indeed and spinning during the day, but spending much of the night in prayer. Fina has a strong devotion to the Virgin Mary, and that she went out only to hear Mass. She was also said to be extraordinarily kind.

Around 1248, her father died when she was still young and about the same time Fina was attacked by a sudden complication of diseases. Fina’s life was changed by a serious illness, which began, progressively, to paralyse her. Desiring to be like our Lord on the cross, for six years she lay on a plank in one position, unable to turn or to move. Her mother had to leave her for hours while she went to work or beg, but Fina never complained. Although in terrible pain she always maintained serenity and with her eyes fixed upon the crucifix she kept on repeating, “It is not my wounds but thine, O Christ, that hurt me”. END_OF_DOCUMENT_TOKEN_TO_BE_REPLACED