25 June 2017. It was cloudy in Fukuoka, Japan. Me and my friend were on our holiday in Kyushu island, Japan.

Weekly Mass for me is a habit, something I do regularly. But attending Mass during holiday has became one of my favorite activity! It started since I accidentally attended a local Mass in Hong Kong. Since then, I tried to always visit the church during the holiday. But attend the Mass is not always easy to do, especially if I traveled with a non-Catholic friend.

But here I was in Japan, and my Catholic friend agreed to join me for a Mass. 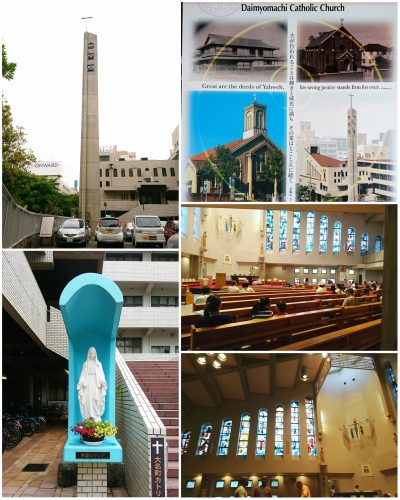 In 1896, a small wooden chapel was built on the site where the present church is located. In 1938, the number of faithful from Fukuoka rose sharply, and then there was the need to expand the chapel premises. The church was rebuilt and reinforced with red brick.

In 1984 he began a new restructuring of the cathedral. In 1986 the church was demolished and a modern concrete church was built in its place. The old church only remained the main altar.

The church follows the Roman or Latin rite and is the main church of the Catholic diocese of Fukuoka (Dioecesis Fukuokaensis; カトリック福岡教区) which was created in 1927 with the Papal brief Catholicae Fidei under the pontificate of Pope Pius XI. END_OF_DOCUMENT_TOKEN_TO_BE_REPLACED

Have you ever been accused unmercifully, like Susanna in (Daniel 13:1-9, 15-17, 19-30, 33-62)? Whether the accusation is true or false, we feel terribly invalidated, especially if it comes without forgiveness. Even when we’ve done nothing wrong, we need an attitude of mercy from our accuser or else the wound goes very deep.

Feeling remorseful for a genuine sin doesn’t make it easier to endure the harsh reactions of others. Since we naturally prefer to look good in the eyes of others, especially when they treat us unmercifully, we defend ourselves and try to rationalize away our sins.

This happens because we’re trying to protect ourselves from shame. Guilt is the honest awareness that we have sinned, which leads to remorse, which leads to healing. Shame is different. Shame belittles us and causes deeper wounds.

Only mercy can protect us from shame. Mercy validates our worth. Without it, we try to undo the shame by manipulating people into liking us and approving of us and affirming us. The more we sin, the more desperate we become for other people’s approval. And the more desperate we become, the less remorse we feel for what we’ve done wrong, because remorse includes the feeling that we deserve disapproval. END_OF_DOCUMENT_TOKEN_TO_BE_REPLACED