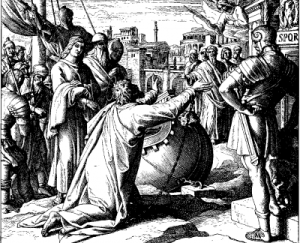 Saint Rufus was the son of Simon of Cyrene (Africa) Cyrenian – the man who carried the cross of Christ for a while.  It is also plausible that Rufus was among those who greeted Saint Paul upon his arrival in Rome.

At the end of his Epistle to the Romans (Romans 16:13) Saint Paul wrote: “Greet Rufus, eminent in the Lord, and also his mother who is a mother to me as well.” Some Scripture scholars associate the Gospel of Mark with Rome, and therefore link it to Saint Paul’s Letter to the Romans in which Rufus is known as a devout Christian and leader.

Tradition states that Rufus became missionaries; the inclusion of his name in Mark 15:21 may suggest that he was of some some standing in the Early Christian community at Rome. Rufus the followed St. Paul to Spain. There, he was appointed the first Bishop of Tortosa. Later Rufus went with St. Sergius to Narbonne. He preached Jesus in Avignon regions. Rufus died around 90 A.D., 22 Mar (old date).