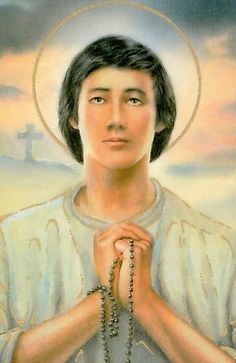 Lorenzo Ruiz was born in Binondo, Manila, to a Chinese father and a Filipino mother who were both Catholic. His father taught him Chinese while his mother taught him Tagalog.

Lorenzo served as an altar boy at the Binondo Church. After being educated by the Dominican friars for a few years, Lorenzo earned the title of escribano (calligrapher) because of his skillful penmanship. He became a member of the Cofradia del Santísimo Rosario (Confraternity of the Most Holy Rosary). He married Rosario, a native, and they had two sons and a daughter. The Lorenzo family led a generally peaceful, religious and content life.

In 1636, whilst working as a clerk for the Binondo Church, Lorenzo was falsely accused of killing a Spaniard. Lorenzo sought asylum on board a ship with three Dominican priests: Saint Antonio Gonzalez, Saint Guillermo Courtet, and Saint Miguel de Aozaraza; a Japanese priest, Saint Vicente Shiwozuka de la Cruz; and a lay leper Saint Lázaro of Kyoto. Lorenzo and his companions left for Okinawa on 10 June 1636, with the aid of the Dominican fathers and Fr Giovanni Yago.

A shock awaited the holy passengers when they arrived in Japan. At the time of their arrival, the rulers of Japan, the Tokugawa Shogunate, were persecuting Christians. Prior to this persecution, the Christian population of Japan was thought to number 50,000 souls.

Now Lorenzo was imprisoned by Japanese officials for the crime of being a Christian and refused to renounce his faith. On September 27, 1637, Lorenzo and his companions were taken to Nagasaki to be tortured and killed if they would not renounce their faith.

Lorenzo and his companions were tortured by water, which was forced into their mouths and down their throats and out their noses and ears. Despite the painful torture, the men refused to renounce his faith.

Following this, Lorenzo was hanged upside down, with a rope around his ankles. This form of torture was known as tsurushi (釣殺し) in Japanese or horca y hoya (“gallows and pit”) in Spanish. The torture forces a person to be hanged upside down with a gash cut in their forehead to prevent too much blood from gathering in the head. The gash also causes the victim to bleed to death over an extended period of time. One hand is left free so the victim can offer an agreed symbol that will represent their desire to renounce their faith. Lorenzo refused to renounce Christianity and died from blood loss and suffocation. His body was cremated, with the ashes thrown into the sea.

According to Latin missionary accounts sent back to Manila, Lorenzo declared these words upon his death: ”Ego Catholicus sum et animo prompto paratoque pro Deo mortem obibo. Si mille vitas haberem, cunctas ei offerrem.” (“I am a Catholic and wholeheartedly do accept death for God; Had I a thousand lives, all these to Him shall I offer.”)

His traveling companions were all killed, steadfast until the end.

Lorenzo was beatified by Pope John Paul II on February 18, 1981. The beatification ceremony was held in the Philippines making it the first beatification ceremony ever held outside the Vatican. A miracle attributed to his intercession occurred in 1983. A two-year-old girl, Alegria Policarpio, suffering from hydrocephaly, a condition she had since birth, was miraculously cured.

“For each one of us, there is only one thing necessary: to fulfill our own destiny, according to God’s will, to be what God wants us to be.” ~ Thomas Merton, No Man Is an Island